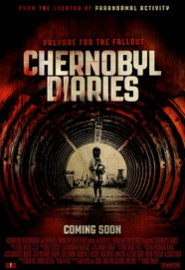 “Chernobyl Diaires is an original story from Oren Peli, who first terrified audiences with his groundbreaking thriller, ‘Paranormal Activity’. The film follows a group of six young tourists who, looking to go off the beaten path, hire an “extreme tour” guide. Ignoring warnings, he takes them into the city of Pripyat, the former home to the workers of the Chernobyl nuclear reactor, but a deserted town since the disaster more than 25 years ago. After a brief exploration of the abandoned city, however, the group soon finds themselves stranded, only to discover that they are not alone...”

The Review
Chernobyl Diaries is a movie that had a really cool plot about a group of kids who go on vacation and decide to take an extreme adventure tour that went awry.  The story is pretty wild in that they end up going on a tour of the Chernobyl nuclear power plant in the former Soviet Union and they are not supposed to be there.

It’s one of those movies where you could see a group of young people actually making a terrible mistake on vacation that could cost them their lives.  That’s what makes the movie interesting since you will say, “Yeah, I could see people doing that.”.  Beyond that though, the film is really bad.  It’s a bit like The Blair Witch Project, where the kid’s go to find out about the witch that is real. In this case, it’s Mutant Zombies, of course.

The acting isn’t bad, but it isn’t good either.  The movie is totally predictable, until the end and the ending really sucked, so there really wasn’t anything good about this movie.  Which isn’t surprising since it’s the same guy who did Paranormal Activity and he kind of followed the same format.

This is at best a rental, but we have to say it’s beyond that and a flat out Don’t Bother.