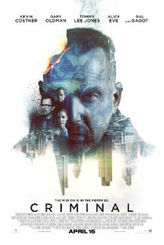 Becky and I went to see the movie Criminal this Weekend at the AMC Theater’s in Castle Rock, CO. The Fandango website at Criminal describes the movie as follows…

“Sociopathic death-row inmate Jerico Stewart (Kevin Costner) is implanted with the memories of a deceased CIA agent (Ryan Reynolds) in a desperate attempt to thwart a deadly plot involving a Dutch hacker (Michael Pitt). At the same time, Jerico reconnects with his own humanity…”

The Review:  Criminal has an all-star cast, but apparently not much of a marketing budget since we saw very little promotion for this film before going to see it.  We didn’t really know what to expect going into the movie, other than that it had Kevin Costner and Ryan Reynolds, but it also starred Gary Oldman and Tommy Lee Jones and the acting and directing of this movie was excellent.  In fact, I thought the whole movie was extremely well done and both Becky and I really liked it.  It’s extremely violent at times, but it’s about a murderer who is used by the CIA to find out about a plot to take over the United States weapon defense system.

The story is rather fascinating, I doubt that it is possible, but the concept is to transfer the memories of a person to another person in order to gain access to information that only the first person had about a special mission.  The movie though is suspenseful and action packed, but it’s really violent.  The criminal is played by Kevin Costner and he does an excellent job playing this character who doesn’t have a conscience and cannot discern between good and evil.  He’s being hunted by the CIA for most of the film, along with the bad guy who wants what is inside his mind and he’s also the hunter at the same time.  All of this chaos makes for an interesting movie, along with some personal conflicts.

I thought this movie was a Don’t Miss It and Becky thought it was Worth The Trip.  I probably liked it more than she did since I’m a fan of thriller and action flicks probably a little more than she is.  I think most people who see this movie that enjoy those type of films with some crazy elements to them will like it..