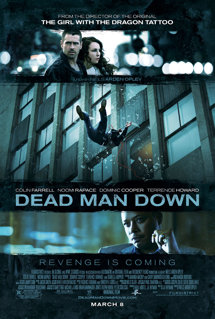 Becky and I went to see the new movie Dead Man Down at the AMC theaters in Highlands Ranch, CO last night.  The Yahoo Movies website at Dead Man Down describes the movie as follows…

“Two strangers who are irresistibly drawn to one another by their mutual desire for revenge.”

The Review:  Dead Man Down is a very odd film in that it’s such a simple movie with a ton of plot twists, which is probably why I liked it.  It’s simple in that it’s just about these two people who meet each other and are desiring revenge, that’s pretty much the entire premise of the film, which is probably why many of the critics are not liking this movie.  However, it’s because of that simplicity that the movie is such a wild ride.

This woman, played by Noomi Rapace, the chick from The Girl With The Dragon Tattoo (the first one, not the second one) is living across the balcony in an apartment building from a gangster, played by Colin Farrell and they are going to eventually meet.  They have been watching each other for sometime and are interested in one another.  They both have a problem they need to solve, which involves murder and this creates a number of interesting plot twists and plenty of action.

The movie does move slow at times for an action film, but it has to build up the suspense because of the characters and how they cannot let go of their past.  Which I thought made for an interesting film because it’s a action film, thriller and a love story all rolled into one.  Becky and I both liked this movie and so did our friends Mark and Maria, but be aware that it does move slow at times, it is pretty violent and a little far fetched at times as well.  It is definitely rated R, but we thought it was worth the price of admission.