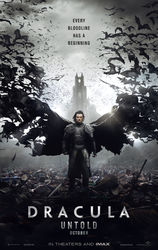 Becky and I went to see the film Dracula Untold last night at the AMC theaters in Castle Rock, CO.  The Fandango website at Dracula Untold describes the movie as follows…

“Director Gary Shore revamps the mythos surrounding Vlad the Impaler in Dracula Year Zero, a Universal Pictures release from a script by Matt Sazama and Burk Sharpless. The horror tale is set to take place in Romania during the Turkish invasion as Vlad (Luke Evans) goes to the greatest of lengths to fight for his homeland — even if it means selling his soul and becoming forever doomed as a creature of the night…”

The Review:  I was looking forward to seeing this movie since I have always enjoyed Bran Stoker’s Dracula and thought it would be cool to see another movie about Dracula.  The special effects were done well, but the story was kind of lame.  It started out very good and was a pretty exciting film, but by the end of the film it got pretty goofy with vampires all over the place.

I don’t think this movie will be for everyone.  It starts out good, but it’s more of a war movie than a vampire horror film.  It has some elements that are more like the movie Van Helsing with it’s “campy” approach to the vampires.  It wasn’t terrible, but it was fairly entertaining.  Once again, there is a final battle scene where Dracula goes from being a super hero that is embodied by evil to suddenly experiencing his kryptonite and struggles to beat a mere mortal.  That was a bit lame.  Becky didn’t like this movie much at all and thought it was a don’t bother.  I think she fell asleep during it.

I think it will make a pretty good rental.