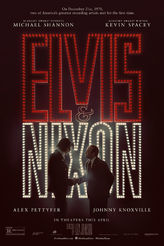 Becky and I went to see the movie Elvis & Nixon at the AMC Theaters in Highlands Ranch, CO today, after running a marathon. The Fandango website at Elvis & Nixon describes the movie as follows…

“This comedy depicts the real-life 1970 meeting between rock star Elvis Presley (Michael Shannon) and then-president Richard Nixon (Kevin Spacey) at the White House, which led to an iconic photo of the two men shaking hands. During the meeting, Elvis offers his services as an undercover agent in the war on drugs. Directed by Liza Johnson (Hateship Loveship)…”

The Review:  Elvis & Nixon is a strange Independent Film about the true story of when Elvis Presley met President Richard Nixon and took a famous photo together.  The film is really bizarre as it shows how crazy Elvis Presley was and how man in power respond to situations that can benefit themselves personally.  The acting in this movie is brilliant, even if there isn’t a great deal to the story other than taking you through the whacky world of Elvis Presley wanting to be an undercover agent to help stop drugs and communism from taking over the United States.  That is what makes the film really funny.

Kevin Spacey is great as President Nixon and although Michael Shannon doesn’t look like Elvis, he played the part of The King of Rock and Roll extremely well.  It shows how eccentric Elvis Presley was and how it was such an iconic era in American History for Elvis to be able to actually gain an audience with Richard Nixon to achieve his goal.  Becky and I both liked the film and thought it was entertaining and actually fascinating more than anything.  We thought it was Worth The Trip.