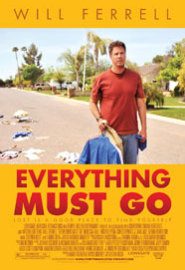 ﻿﻿Becky and I went to see the new Will Ferrel movie this past weekend at the AMC theater in Highlands Ranch.  The MovieFone website at Everything Must Go describes the movie as follows:

“Adapted and directed by Dan Rush, and based on a short story by Raymond Carver, ‘Everything Must Go‘ tells the story of Nick Porter (Will Ferrell), a career salesman whose days of being on top are long gone. The same day Nick gets fired, for falling off the wagon one last time, he returns home to discover his wife has left him, changed the locks on their suburban home and dumped all his possessions out on the front yard. Faced with his life imploding, Nick puts it all on the line — or more properly, on the lawn — reluctantly holding a yard sale that becomes a unique strategy for survival.“

The Review
Everything Must Go is really Everything Must Suck, including this movie.  We went in expecting more of a comedy than a drama and that was part of the problem, but not entirely.  How this movie ever was produced and Directed we do not know.  It’s about this guy who is an alcoholic that loses his job.  His wife leaves him because she is a recovered alcoholic and apparently he can’t shake the booze, but on her way out she locks him out of their house and puts all of his stuff on their front lawn to move on.

He goes on a drinking binge in the front yard and hires a lonely neighbor kid to help him sell his junk.  He then meets a woman across the street who is pregnant and movie into the neighborhood and they become friends, but in the meantime he discovers his wife is shacking up with his best friend and AA Sponsor.  For 96 minutes we have to endure through this movie, watching this guy sell his junk in his yard as he tries to figure out what his next move is since his life now sucks so bad.

Becky and I both thought this movie was a total waste of time.  There are a couple of funny parts in the film, but overall it wasn’t worth the price of admission or even the time you would waste watching it as a rental.