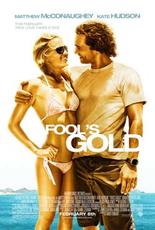 Becky and I went to see Fool’s Gold

Big Wednesday on dvd at the AMC theaters in Highlands Ranch, Colorado on Sunday night with our friends Rod & Kimberly Tactaquin. It was a big movie weekend for us, or at least for me, since I went to the movies every night this past weekend. The Fandango website at Fool’s Gold describes the movie as follows:

“Ben Finnegan (Matthew McConaughey) is a good-natured, surf bum-turned-treasure hunter who is obsessed with finding the legendary 18th century Queen’s Dowry 40 chests of exotic treasure that was lost at sea in 1715. In his quest, Finn has sunk everything he has, including his marriage to Tess Finnegan (Kate Hudson) and his more-rusty-than-trusty salvage boat, Booty Calls. Just as Tess has begun to rebuild her life, working aboard a mega-yacht owned by billionaire Nigel Honeycutt (Donald Sutherland), Finn discovers a vital clue to the treasures whereabouts. Certain that his luck will change with the newfound information, Finn maneuvers himself aboard Nigel’s yacht and, using his good-natured charm, convinces the tycoon and his Blackberry-wielding, celebutante daughter, Gemma (Alexis Dziena), to join him in the pursuit of the Spanish treasure. Against Tess’s better judgment, the search rekindles her love of discovery.”

The Review
Fool’s Gold is a good, clean and fun romantic comedy that reminded me of the 80’s classic Romancing The Stone. It’s lighthearted and will keep your interest with plenty of laughs. The characters were very well done, you definitely believed that Matthew McConaughey was really the character he played. Kate Hudson was good in the film too, along with Donald Sutherland, but Matthew stoled the show with his airhead, surfer type, treasure hunter, mentality.

We all enjoyed it and had a number of great laughs. In particular, BigBunny, “one word”, was hilarious and the other characters in the film all added together made this movie a very funny comedy.

Fool’s Gold will make a great rental and it’s definitely worth seeing on the big screen as well.