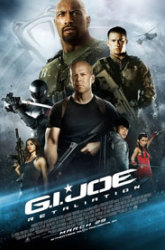 Becky and I went to see G.I. Joe: Retaliation  a couple of weeks ago when it came out at the AMC Theater in Castle Rock, CO with Conroy, Corban and Bianca. The MovieFone website at G.I. Joe: Retailiation describes the movie as follows…

“Veteran dance-film director Jon Chu takes a crack at G.I. Joe in this sequel to Stephen Sommers’ blockbuster 2009 film. Dwayne Johnson stars as Roadblock in the sequel, with Channing Tatum returning as Duke, the leader of the Joes, and Ray Park…”

The Review:  G.I. Joe: Retaliation is a sequel to the previous G.I. Joe movie and it was just as bad as the first one.  It’s getting great reviews from the audience, but I have to go with the Critics on this one.  It’s just not a very good movie.  The story is actually pretty good, with the evil empire kidnapping the President and wiping out the “Joes”, but the delivery is not as good as what the G.I. Joe’s pull off in the movie.

The G.I. Joe characters have super human qualities that will make you think you’re watching a Marvel or D.C. Comic movie and it’s just painful to watch.  There are some cool stunts, some great action, but it’s non-stop action that is beyond ridiculous.  Bruce Willis shows up to show that he can use a machine gun and run around on a movie set, but he’s not anymore believable than the rest of these characters.  I guess that’s what we’ve come to expect though from these movies now, which borderline on playing a video game more than watching a movie.

Bianca and her friends liked the movie and thought it was Worth The Trip but keep in mind that she is 12 years old.  I am going to have to recommend you wait for the rental and that was pushing it for me since at times I thought I was watching the Teenage Mutant Ninja Turtles or who were those other goofballs who dressed up in colored uniforms with their super powers and swords that are appealing to an 8 year old?  Oh yeah, it was The Power Rangers.

The rest of the gang gave it a rating of being a rental as well.