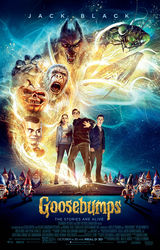 Becky and I went to see the new movie Goosebumps at the AMC Theater in Castle Rock, CO last week. The Fandango website at Goosebumps. describes the movie as follows…

“Jack Black stars as acclaimed Goosebumps writer R.L. Stine in this feature-film adaptation of the popular YA book series. A teenager named Zach (Dylan Minnette) reluctantly moves from New York City to the quiet town of Madison, DE, where he quickly realizes that his reclusive new neighbor is in fact the horror author of the Goosebumps series. Zach learns Stine’s identity when he is drawn to the writer’s daughter Hannah (Odeya Rush), but soon discovers the dangerous secret inside their home — the creatures from Stine’s famous stories are real, and are kept locked away inside their original manuscripts…”

The Review:  I didn’t want to see this movie.  I went into it with really low expectations because the previews for the movie looked cheesy and I figured it would be terrible.  However, Becky and Corban met me at the theater on Tuesday night and it was just $4.50 to get into the flick with a AMC Stubs card.  I figured there wasn’t much to lose for under $5 and I was pleasantly surprised the movie was much better than expected.

This is not a great movie by any stretch that is going to win any awards, but it was entertaining.  It’s a fantasy movie about the author of Goosebumps, R.L. Stine, who I believe appears in the film kind of like Alfred Hitchcock used to do in his movies and Stan Lee does in the Marvel films.  He has his manuscripts locked up and if you open them the monsters come to life.  It’s a pretty good story and it’s a great movie for kids.  We all liked it and found it entertaining.

We thought that Goosebumps was Worth The Trip depending on who you are, but some people will find it a waste of time.