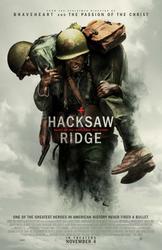 Becky and I went to see the movie Hacksaw Ridge last week the AMC theater in Castle Rock, CO last week .  The Fandango website at Arrival describes the movie as follows…

“Mel Gibson directed this biopic about World War II Army medic Desmond Doss (played here by Andrew Garfield). A conscientious objector who refused to take a life or even carry a weapon, Doss was eventually awarded the Medal of Honor for saving the lives of 75 soldiers on the battlefields of Okinawa..”

The Review:  Hacksaw Ridge is a true story Directed by Mel Gibson about Desmond Doss, who was an American Hero who refused to take a life during World War II.  The movie is extremely well done and could very well be nominated for Best Picture this year.

The film tells the story about his life as a child, the life of his father and his father’s friends, who had died in World War I and his brother signing up to fight in World War II.  Desmond also decides that he must do his part to serve his country even though he refuses to take a life based on his religious views.  Which is a very odd position to take for volunteering for the Army during a war.

The acting and directing and the story is fantastic and this movie is superb.  I am amazed that anyone would like this film because the story is incredible.  The fact that it’s a true story is even more amazing.  This is definitely a Don’t Miss It.