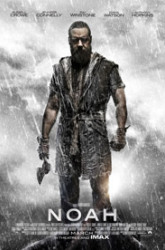 I talked Conroy into going and seeing the new movie NOAH with me tonight at the AMC theaters in Castle Rock, CO. The Moviefone website at Noah describes the movie as follows…

“Russell Crowe stars as Noah in the film inspired by the epic story of courage, sacrifice and hope. Directed by visionary filmmaker Darren Aronofsky.”

The Review:  Conroy reluctantly agreed to go and see this movie with me, after he saw God’s Not Dead with Becky and I earlier this week.  I told him that it would probably be a good science fiction movie, since it’s impossible for the morons in Hollywood to ever make a good movie about the Bible.  I’m sorry, but they’re completely ignorant and illiterate when it comes to the Bible and I was right once again, but wrong that it would be a good science fiction movie.  This movie sucked!  I think even the actors were bored with it and didn’t like it.

Noah turns out to be a psychopath, ready to kill his children because God wants all of mankind dead, including Noah and his family.  That’s really Biblical?  Not hardly.  The guy who made this film was obviously an environmental activist, who has never actually read the Bible.  If he did, he must have been eating mushrooms at the time.  Which Noah does in this movie with his grandfather played by Anthony Hopkins, in order to hear from God   Apparently, the way you heard from God to write the Bible and avoid getting swept up in God’s judgement is to drink herbal tea.

After all, God was destroying the Earth because fallen angels came down to try to help men.  They disobeyed God, but these “Watchers” shared their amazing technology with men that caused mankind to destroy the Earth and kill all the animals.  These fallen angels had really good intentions and God simply misunderstood them.  After all, they were not really here to deceive men, so God encased them in a body of stone to serve mankind for eternity.  They earn their wings back though by the end of the film by asking God for forgiveness, after protecting Noah and helping him build the Ark.  I think the people who made this film have been deceived by them.  This movie was not even close to anything that resembled the Bible, except for a flood and a guy and his family in an ark that landed on a mountain.  Don’t go to see this movie, expecting to see a Bible based film or you will be really disappointed.

I’m not just disappointed that it was a total exploitation and re-writing of the Bible, but it was just really horrible movie making with great actors.  I can’t believe that people actually liked this movie, even the critics.  All I can figure is the critics had to be paid off.  The characters were all insane.  At one point in the movie there is a battle between Noah and the evil leader of mankind, Tubal Cain, but you don’t know whether to cheer for Noah or Tubal Cain because they are both out of their minds.   The battle scenes looked fake with terrible CGI.  Later on, the character Tubal Cain chops his way into the Ark, during the storm and hides out with the help of Noah’s son Ham, who is thinking about killing his father Noah, and the guy starts eating the animals that God put on the Ark.  He’s eating them raw too, which was just absurd.  The only cool part about this movie were the special effects with the animals and the flood itself.  The rest of the time,  I thought we were watching a soap opera  and I heard numerous people laughing during the film, like we did several times.  It could easily become a regular showing at Scientology conferences or Vegan Festivals everywhere with the rock people with bright eyes, much like the tree people in Lord of The Rings.

As I mentioned, I didn’t expect this film to follow the Bible because Hollywood doesn’t know how to do it  It’s way beyond their skill set.  Think about it, can you name one good movie based on the Bible?  The Passion of the Christ was close.  The Ten Commandments was the best, but it’s too old and then The Book of Eli, but that’s not based on a Bible character, so that is pretty much it.  I just had no idea that they would make a movie called Noah and it would be so incredibly bad as what we just watched.  Steve Carell’s comedy about Noah, Evan Almighty, was a better film than this and that was supposed to be a joke.  This version of Noah was painful to watch and we wanted to leave half way through the movie because we were bored out of our minds with lunatics running around the screen like something out of Kevin Costner’s Water World, vegetarian cult like messages throughout, and a Creator and his prophet, who apparently didn’t even like innocent people.  Talk about totally misrepresenting God and Noah.  I wouldn’t want to be in these guys shoes when they stand before Him.  They might end up like their imaginary Watchers.

Our advice is to not get swept away with the flood of hype surrounding this movie.  Run from Noah before you drown in the theater watching this ridiculous film.  It’s definitely a don’t bother and we would love our time that was wasted back, along with our money.