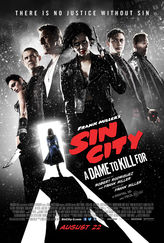 “Robert Rodriguez teams with Frank Miller to direct this follow-up to Sin City from a script by Miller and William Monahan based on preexisting stories along with new ones written for the big screen. Josh Brolin stars in the adaptation of the comic miniseries (Sin City: A Dame to Kill For), which tells the backstory of Clive Owen‘s Dwight character as he is wrapped up in the thralls of femme fatale, Ava (Eva Green). Also new to the series is Joseph Gordon-Levitt, who plays Johnny, a mysterious gambler…“

The Review: Sin City: A Dame To Kill For is round two of the first Sin City film with Bruce Willis and Jessica Alba that Robert Rodriguez did a few years ago.  It’s a really strange and violent film with multiple stories going on at the same time with a comic book feel to it.  The characters are interesting, but this is a weird “cult” type science fiction and action film that is probably too whacky for most people.  It is one of those movies that you will either really like or probably hate.  I think that very few people will kind of like this movie, which is why I’m giving it a rental for a rating, since I was one of those people.

It’s extremely violent, so I didn’t really like that part of the film.  There is also plenty of sex too, which you would expect both of these I guess with a name like Sin City.  The comic book feel I thought was pretty cool and that’s what I liked about the movie because it’s very different.  It is in black and white and every once in a while there is a splash of color, so from an artistic perspective that was rally cool.  The movie though wasn’t very good because the story is not that great because it jumps around all the time.  You never get emotionally attached to any of the characters in the movie  You really don’t care what happens to anyone in the film because they are all nuts.  The acting is good though and the characters are definitely bizarre.

Becky hated this movie and fell asleep during it.  She thought it was a complete waste of time and fell asleep a few times during the movie.  Which is why she said it’s a Don’t Bother.  I liked it a little more than she did, but I wouldn’t want to see it again, so I’m giving it a Rental.