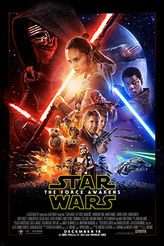 Becky and I went to see the new Star Wars movie The Force Awakens at the Chinese Mann theater in Hollywood, CA on Friday with Conroy, Corban and Bianca. The Fandango website at Star Wars: The Force Awaken describes the movie as follows…

“In this continuation of the epic space opera, a downed stormtrooper (John Boyega) goes on a journey that brings him face-to-face with heroes from the past (Harrison Ford, Carrie Fisher, and Mark Hamill). Directed by J.J. Abrams…”

The Review:  I saw the original Star Wars over 27 times when I was 10 years old in 1977 at the movie theater and many more times on VHS and DVD when it became available.  After Return of the Jedi, I thought the franchise went seriously downhill and started turning into more of a fantasy version of “The Days of our Lives” soap opera as they tried to make the movies as good as the first three.

Along comes Disney thats buys the rights to Star Wars for $4 billion and hires J.J. Abrams, who directed Star Trek to launch a new movie The Force Awakens, with a whole new set of stars and some of the characters from the original one.  The movie was really well done as you would expect, but it was a complete knock-off of the first three films.  I don’t wont to be a “spoiler”, but they went back to the “Luke, I am your father” situation again, only with another character, along with a female version of Yoda and even the classic bar scene.  Instead of Luke Skywalker, this time around there is a young female version of Luke who finds a droid just like R2D2 and if you’re a fan of the original Star Wars, you will see similarities to the first Star Wars, even including a bigger and more destructive Death Star.  There is even a new Obi-Wan, who arrives in the movie and will certainly be in the next one around.  I just have to wonder if the next one will be a remake of The Empire Strikes Back.

The bottom line is that there is very little new here at all.  It is definitely “The Force Awakens” because it’s a total rehash of the first one, which maybe everyone was expecting, but I thought it was supposed to be a completely new movie.  It is still entertaining for Star Wars fans and it was really well done.  We all thought it was entertaining, but I personally thought J.J.’s remake of Star Trek was actually better because the story was completely new and not a remake.  I enjoyed it enough to give it a Worth The Trip, if you’re a Star Wars fan.  Becky is not a fan though and she still thought it was Worth The Trip.