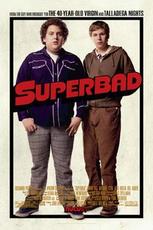 Becky and I went to see Superbad last night at the Kerasotes theaters in Castle Rock, Colorado. The Fandango website at Superbad describes the movie as follows:

High-school seniors Seth (Jonah Hill) and Evan (Michael Cera) have high hopes for a graduation party: The co-dependent teens plan to score booze and babes so they can finally be part of the in-crowd, but their separation anxiety and two bored police officers (Bill Hader, Seth Rogen) complicate the pair’s self-proclaimed mission.

Review
Superbad should have been called Superstupid, but I guess Superbad works since it was such a bad movie. It looks really funny from the previews of the film, but most of the funny parts were shown in the clips for the film. It’s rated R for crude and sexual content, language, drinking, drug use and a fantasy/comic violent image. The movie is definitely all of that and more. There are some funny parts of the movie, but it’s so crude and stupid that it gets really boring super fast.

Superbad doesn’t do it for anyone with a mentality over 17, but it’s going to get rave reviews at the box office since so many teenagers will go to this flick. I can’t even say that it would make a good rental. There are a couple funny characters like a kid who gets a fake I.D. where he calls himself McLovin.

It wasn’t worth the price of admission and will be on the rental rack sooner than later. If you are missing hearing the “F” word every other sentence than you will want to rent it, otherwise don’t bother.