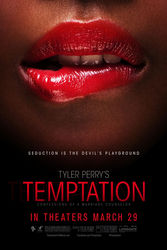 Becky and I went to see the new Tyler Perry movie Temptation on Friday night with our friends Mark & Marie at the AMC Theaters in Castle Rock, CO.  The Fandango website at Temptation describes the movie as follows…

“Acclaimed playwright Tyler Perry explores the hardships of marriage and the benefits of confronting problems in this drama about the stressful union between a hardworking accountant and his loving wife, a harried marriage counselor. Roger Jackson strives to support his family, a group that includes not only his Ivy League-educated wife Judith (Jurnee Smollett-Bell), but his ganja-smoking father Stanley and her Bible-thumping mother TT as well. Meanwhile, Judith doles out thoughtful advice to couples every day, yet remains completely powerless when it comes to addressing the issues surrounding her own troubled marriage. When an old college friend drops by her office, Judith faces her biggest personal challenge to date. Perry previously brought this tale to the big screen with a filmed stage version in 2008. ~ Jeremy Wheeler, Rovi…”

The Review: I had zero interest in seeing this movie.  Becky and I had seen the Previews several times and I thought it looked terrible, but our friend Maria wanted to see it, so we went with her and Mark on Friday night.  It was pretty funny because she said to me, “You don’t want to see this do you?” and I said, “No.” and she said, “Too bad because I see all kinds of stupid movies with you and Becky that I don’t want to see.”, which was really funny.  I knew I better shut up and just go because she was right, we see some really bad movies and this couldn’t be as bad as some of the movies we’ve seen this year.

The Critics said this movie wasn’t worth the price of admission, but we have to disagree with them on this one.  The fact is that we all liked it and thought it was worth the price of admission.  It’s very well done and real to life.  Tyler Perry did a great job on this film, except that it does move really slow at times.  It has a good story and message about priorities in life, the struggles people face and the lure of temptation that can destroy people’s lives, especially if they are not careful and give into the temptation. Which unfortunately millions of people often do and it costs them dearly.

The movie had heart and character, but he did throw in the kitchen sink when it came to problems people were facing.  Most of the people in the movie were totally dysfunctional, but that’s probably pretty true in America today, so he wasn’t completely out of touch with reality in that regard.  We thought it was Worth The Trip and if you don’t see it in the theater, it will make for a good rental when it comes out on DVD.