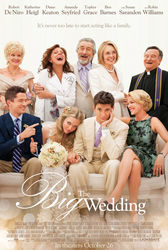 Becky and I went to see The Big Wedding  this Weekend at the AMC Theater in Castle Rock, CO with her Mom and Dad. The Fandango website at The Big Wedding describes the movie as follows…

“A charmingly modern family tries to survive a weekend wedding celebration that has the potential to become a full blown family fiasco. To the amusement of their adult children and friends, long divorced couple Don and Ellie Griffin (De Niro and Keaton) are once again forced to play the happy couple for the sake of their adopted son’s wedding after his ultra conservative biological mother unexpectedly decides to fly halfway across the world to attend. With all of the wedding guests looking on, the Griffins are hilariously forced to confront their past, present and future – and hopefully avoid killing each other in the process…”

The Review:  The Big Wedding is the big fiasco that the movie is trying to prevent.  It’s an all-star cast with a terrible script and a ridiculous story that never comes together to make any sense.  The characters are whacky and the film is loaded with just terrible situations that are meant to be funny, but are not entertaining.  The family is totally dysfunctional and that’s supposed to make for a good film, but it was boring to watch and at times painful.

Robert Deniro looks like an old man in this movie and his character is tragic example of a man with a failed marriage and failed relationships with his family.   His ex-wife played by Diane Keaton and his new wife played by Susan Sarandon are good actors, along with other actors in The Big Wedding, but the film has absolutely no substance.  It’s a really lame flick that none of us liked at all or found worth the time invested to watch it.

Becky and I both agreed that this movie wasn’t what we expected and can’t recommend it.