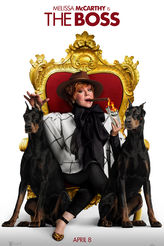 Becky and I went to see the movie The Boss on opening day at the AMC Theater’s in Castle Rock, CO. The Fandango website at The Boss describes the movie as follows…

“Hugely successful businesswoman Michelle Darnell (Melissa McCarthy) is convicted of insider trading and sentenced to prison. After being released, she is forced to move in with a long-suffering employee of hers (Kristen Bell), and tries to earn redemption and revamp her public image by helping a group of young girls in their quest to sell brownies….”

The Review:  The Boss is a ridiculous comedy starring Melissa McCarthy and Kristen Bell about a woman who faced adversity as a child, only to get to the top of her game, like a Martha Stewart with a much more boisterous personality.

She is on her “A game” in life, when she gets convicted of insider trading, like Martha Stewart, only when she comes out of prison her world is completely different.  She has lost everything and has to start from ground zero and ends up living with her former employee and her daughter.  It’s more like a Trading Places type of situation, if you remember that film with Eddie Murphy and Dan Ackroyd, where Dan found himself living like a pauper after being accustomed to the “good life”.

The story is pretty funny and entertaining.  It has some good laughs, but be prepared for the ridiculous and the unrealistic as well, so don’t go into this movie expecting something close to reality.  It’s just goofy entertainment, but we both liked it.  The acting is good and the story is fun because it’s so ridiculous.

This is a film that is somewhere between being a rental that you can wait for to come out on Redbox or Netflix and going to see it on the Big Screen at AMC or Regal Cinema’s which is where we usually end up watching most of our movies.