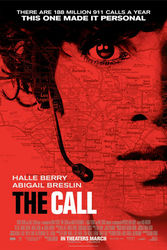 Becky and I went to see the new movie The Call at the AMC theaters in Castle Rock, CO last week. The Fandango website at The Call describes the movie as follows…

“An emergency operator receives a desperate call from a kidnapped teen, and races to locate the young victim while facing a terrifying killer from her own past in this thriller from director Brad Anderson (The Machinist, Session 9). Abigail Breslin and Halle Berry star in a film penned by Richard D’Ovidio (Exit Wounds, Thir13en Ghosts). ~ Jason Buchanan, Rovi..”

The Review: Becky was really excited to see this film and I wasn’t overly thrilled about it.  I didn’t think it looked very good and thought it would be really predictable and the critic reviews were not very good for the movie.

It turned out to be a pretty good thriller that delivered much better than I expected, although it is very disturbing.  The psychopath in this movie made it look way too easy to kidnap a person and kill them, which I didn’t like at all.  When we showed up at the movie, some friends of ours were there seeing the film as well and she’s actually a 911 operator and her husband is a police officer.  That was wild since this movie is about a 911 operator, who gets a call from a girl who has someone break into her house that is a murderer and it’s a crazy film from there on out.

They both liked the movie and thought it was well done and realistic.  That fact of course made it even more disturbing and it is grotesque at times and bone chilling to think that there are people like the killer in this film, who are seriously influenced by the demonic,

Becky and I both thought it delivered on what it promised, but I’m not sure I liked it because of the content, it was very well done.  If you’re in the movie for a psychotic thriller than go see this movie.  I can’t say I would want to watch it a second time.