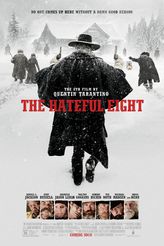 “Bounty hunter John “The Hangman” Ruth (Kurt Russell) and his dangerous prisoner Daisy Domergue (Jennifer Jason Leigh) encounter a treacherous blizzard en route to her sentencing in Wyoming. During their stagecoach ride they come across another bounty hunter, Major Marquis Warren (Samuel L. Jackson), and former Confederate rebel leader Chris Mannix (Walton Goggins). Seeking refuge from the weather, the group chart a course for a mountain cabin to wait out the storm. There, they meet four other traveling strangers (Tim Roth, Demián Bichir, Michael Madsen, and Bruce Dern) with whom they must share the stuffy confines until the end of the blizzard…”

The Review:  I had high hopes for this film and thought it looked like a great Spaghetti Western, like The Good, The Bad and the Ugly, but I was concerned that it was a Quentin Tarantino film.  Quentin is the most overrated Director in all of Hollywood in my opinion since all his movies move at a snail’s pace as he builds up the characters in the story, only to kill them off with as much carnage as possible.  Which is exactly what you can expect again this time around.  He doesn’t just shoot a guy, he has to shoot them a few times with plenty of blood and then blow their head off, so that you can get the full effect of the murder being committed.

Welcome to the grotesque world of Quentin Tarantino who directs a every movie like he really wants to make a B rated horror movie, like Jason kills Freddie with plenty of blood and guts, while trying to be a Director like Ron Howard with his script and dialogue to captivate his audience.  I’m not buying it and think it’s a pretty lame way to make a movie, but many people love his work.  I keep trying to be a fan, but it’s always the same thing, over and over and over again.  He’s the polar opposite of a great director like Alfred Hitchcock, who could freak you out with a shower scene in Psycho, while leaving something for the person’s own imagination.

The acting in this movie is really great.  The cinematography at times is breathtaking with the mountains and the realism of the blizzard and even the setting in the film is interesting, along with the story at times.  However, it drags on and on and on for almost three hours of getting to know people that are going to be killed in this Hollywood horror film.  Quentin needs to get that shot he knows his audience will love of brains splattering all over a woman’s face because that is quality movie making at its best.  Maybe if you subscribe to Gore Magazine you will love this movie, but most of it is just senseless violence that gets ridiculous after awhile.

After a while, you will just become numb to the killing, along with the movie and you will just want all the characters to die quickly so you can leave, like in that terrible vampire movie he did with George Clooney and Harvey Keitel, From Dusk Till Dawn.  I think that is part of his success is that he always casts really great actors, like in this movie where Kurt Russell, Samuel L Jackson, along with all the other actors did a great job in this film.

At one point, this movie turned into a game of CLUE with one of the murderous gunslingers, actually carrying around a bottle of poison with them in case their guns didn’t work or something.  There is even a narrator who comes in to explain to the audience what is going on because apparently we are all too stupid to figure out this movie, which is really not complicated.  It will have you asking the question, “Which of the hateful eight gunfighters did it in the kitchen with the poison?”.  I almost felt like I was watching Reservior Dogs again only in the Wild West during a blizzard and twice as long, even with many of the same cast members.  We just needed Harvey Keitel bleeding all over the place, along with some of his former cast.

The bottom line is that I was hoping for a Worth The Trip or maybe even a Don’t Miss It, but instead we got a Rental at best and only for the acting.  Conroy seemed to like it the most by the way, until close to the very end and then he started to lose interest in it as well.  I heard people leaving the theater talking about it and trying to convince one another that they liked it.  Which was the same experience for the previous seven films I watched of his.