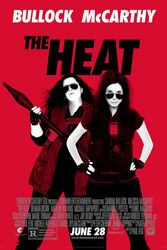 Becky and I went to see The Heat a few weeks ago at the AMC Theaters in Castle Rock, CO and I have to say that the popcorn at AMC sucks lately, compared to what they used to use.  The Fandango website at The Heat describes the movie as follows…

”Uptight and straight-laced, FBI Special Agent Sarah Ashburn (Sandra Bullock) is a methodical investigator with a reputation for excellence–and hyper-arrogance. Shannon Mullins (Melissa McCarthy), one of Boston P.D.’s “finest,” is foul-mouthed and has a very short fuse, and uses her gut instinct and street smarts to catch the most elusive criminals. Neither has ever had a partner, or a friend for that matter. When these two wildly incompatible law officers join forces to bring down a ruthless drug lord, they become the last thing anyone expected: buddies. From Paul Feig, the director of “Bridesmaids.”

The Review:  The Heat is a movie that I thought was going to really stink based on the Previews that I saw for it.  It just didn’t look like a very funny movie and I figured they burned all the jokes in the trailers, but what was funny is that most of the jokes in the Previews were not in the film.  Becky’s brother had also seen it and he said that it was terrible, so we had really low expectations going into this movie, but for some reason we decided to see it anyway.  Actually, the reason was because Becky still wanted to see it or I would have passed.

The story is actually entertaining and funny at times, but it reminded me of that movie where Sandra Bullock dresses up to be a beauty queen, Miss Congeniality.  It was extremely predictable and had some good laughs at times, but it was also ridiculous.  There were parts like Bridesmaids that were really funny and some of the characters will definitely make you laugh, but it wasn’t a great movie.  This is one of those movies that is going to show up on FX or some other television channel in a few years on Sandra Bullock tribute day.

It’s probably going to hit the rental racks pretty soon and I would suggest waiting for it to arrive at Redbox, unless you don’t have anything else to see at the box office and want to see a movie.  It’s not terrible, but it’s somewhere between worth the trip and a rental.  Becky really liked it and her brother and I thought it was “okay”.