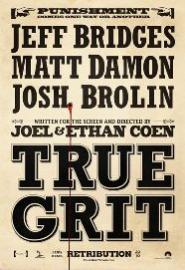 Becky and I went to see True Grit over Christmas week at the AMC Theaters in Highlands Ranch, CO. The MovieFone website at True Grit describes the movie as follows:

The Review
True Grit is a remake of the original John Wayne movie that won him an Oscar and this time Rooster Cogburn is played by Jeff Bridges and the Texas Ranger is played by Matt Damon. This story is Directed by the Coen brothers and it’s based on the book instead of being a remake of the first movie.

The story is great. There isn’t a great deal of action, as you might expect for a name like True Grit. It’s still very exciting though and is a classic Western with plenty of details about the Wild West. One of the neat things about this movie is the language. They apparently hadn’t discovered apostrophe’s yet, so instead of saying “don’t” the characters say “do not”. It’s more of a character story than anything else, about three people and how they came to be together in a manhunt.

The acting in this movie is superb. I’ll be surprised if there are not Oscar nominations again for this movie for best actor, best supporting actor and for best picture. All of the actors and actresses in this movie played their parts way too well. They were amazing and definitely made the movie worth seeing for sure. The story is really good and even though it’s a remake it’s different and worth seeing on the big screen for sure.