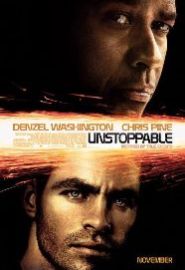 Becky and I went to see the new Denzel Washington flick Unstoppable last night at the AMC Theaters in Highlands Ranch, CO with our son Conroy and Bianca. The Fandango website at Unstoppable describes the movie as follows:

“‘Denzel Washington and Star Trek’s Chris Pine star in this action thriller from director Tony Scott. The plot surrounds two locomotive operators who team up to stop a runaway train filled with explosives…”

The Review
Unstoppable is a movie that is based on true events, which we are to assume I guess to be a true story about an unmanned train that has gone rogue heading toward Stanton, PA. Of course, how much of it is true we don’t really know, but it’s very exciting and action packed.

The language in this movie sucked. They were constantly taking God’s name in vain and the swearing got a bit annoying after while, especially when you have your kids in the movie with you. I guess if you work for a train company you only know four letter words and how to swear in order to communicate. Beyond that the movie doesn’t have a great deal of substance, it’s kind of like the movie “Speed” where the bus can’t slow down, only now we were watching a train that can’t stop.

Even though it’s not a super story with a complex plot, but the movie was very exciting. It will keep you on the edge of your seat and you’ll scratch your head at the stupidity of Corporate Executives some times with the decisions they make. You also see the power of the human spirit and the risks these men were willing to take to save lives and do their jobs. It was a cool movie and we all enjoyed it.