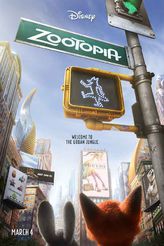 Becky and I went to see the movie Zootopia at the UA Theaters in Greenwood Village, CO on Sunday. The Fandango website at Zootopia describes the movie as follows…

“In a city inhabited by anthropomorphic animals who have abandoned traditional predator/prey roles in favor of civilized coexistence, uptight rabbit police officer Judy Hopps (voiced by Ginnifer Goodwin) is forced to work with charismatic fox con artist Nick Wilde (Jason Bateman) to crack a major case involving the mysterious disappearance of some carnivorous citizens. But when a few of the missing critters reappear, having reverted to pre-enlightenment savagery, it exposes existing anti-carnivore prejudice among the city’s herbivores that threatens to damage the fabric of their diverse metropolis…”

The Review:  Zootopia looked like a really stupid movie that we decided to go and see on a Sunday afternoon with Corban and Bianca since we still are suckers for animated kid’s movies.  The story though was really well done, the animation was great and it was extremely entertaining.  There was plenty of adult humor and lots of laughs for the kids.  This movie is doing extremely well at the box office and it should because it is really a great flick.

The character of the bunny was really funny and it is about how she wants to be the first bunny police officer in the big city of Zootopia that is dominated by the carnivores.  It has an element of political correctness to it, but overall it’s pretty funny and entertaining, in the same way as Ice Age did in this genre a few years back.

Becky and I both liked it and thought it was a Don’t Miss It.