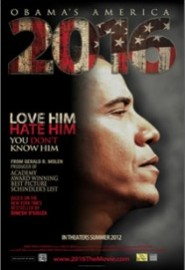 Becky and I went to see the movie 2016: Obama’s America at the AMC Theater in Castle Rock, CO.  I’m really behind on writing movies, so Im’ writing them as I have time.  I’ve been working on my new book for ShareMerchant.com, which has been taking a great deal of time, so that I can get it launched very soon.  The Moviefone website at 2016: Obama’s America describes the movie as follows…

“‘2016: Obama’s America’ takes audiences on a gripping visual journey into the heart of the world’s most powerful office to reveal whether the struggle of one man’s past will redefine America over the next four years. The film examines the question, “If Obama wins a second term, where will we be in 2016?”

Across the globe and in America, people in 2008 hungered for a leader who would unite and lift us from economic turmoil and war. True to America’s ideals, they invested their hope in a new kind of president, Barack Obama. What they didn’t know was that Obama is a man with a past, and in powerful ways that past defines him–who he is, how he thinks, and where he intends to take America and the world.

Immersed in exotic locales across four continents, best selling author Dinesh D’Souza races against time to find answers to Obama’s past and reveal where America will be in 2016. During this journey he discovers how Hope and Change became radically misunderstood, and identifies new flashpoints for hot wars in mankind’s greatest struggle. The journey moves quickly over the arc of the old colonial empires and into America’s empire of liberty, and we see the unfolding realignment of nations and the shape of the global future.

Emotionally engaging, ‘2016: Obama’s America’ will make you cheer and leave you confounded as you discover the mysteries and answers to your greatest aspirations and worst fears….”

The Review 2016: Obama’s America is a documentary by Dinesh D’ Souza that is a very controversial film because it asks questions about the current President Barrack Hussein Obama II that many people have about what his mission is for the United States of America and his past history.  The President has sealed his college records, he distanced himself from Jeremiah Wright, after hanging out in his church for years and created many other questions about his first term as President.

What I find fascinating is how many liberals are having a problem with this film, but they never questioned Michael Moore’s film Fahrenheit 9/11 about President George Bush.  The difference between the two films is prety huge.  I saw both of them and I liked them both, but Michael Moore’s film was much more sensationalistic with a great deal of speculation and far fewer facts.  This movie is based largely on President Obama’s own book that was first published in 1995, Dreams from My Father: A Story of Race and Inheritance, which was long before he ever came on the scene as President.  How can you deny facts that The President of the United States wrote about himself?

Dinesh connects the dots between Barrack’s upbringing in Indonesia and Hawaii away from his birth father Barrack Sr., who had anti-colonial views, and President Obama’s own political views that are also anti-colonial as well.  He is not a fan of Israel and sees America as a bully to the rest of the World, which if true, is crazy for a President of the United States of America.  It would be like the CEO of Disney having a problem with Mickey Mouse; He wouldn’t last long as the CEO.  He makes a very interesting and compelling case in this film about why America has already and is going to change even more drastically under his continued leadership.  I got the impression from the film that the poor of America are  rich compared to the rest of the world, so in President Obama’s view, America needs to give back to the rest of the world and pay for our sins of being involved in colonizing the world and protecing Israel.  It’s a scary future for America, if it’s true.

Dinesh is being criticized though that parts of his film is not true, but I would say that if half of what he’s shared is true that it’s disconcerting.  He has responded to an Associated Press article that you can read at this link – fact check.  I thought the movie was definitely Worth The Trip, and a Don’t Miss It if you’re a History buff.  Becky was bored and fell asleep a few times, but she doesn’t like documentaries or history.