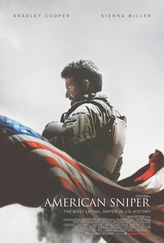 Becky and I went to see the new movie American Sniper at the AMC Theaters in Highlands Ranch, CO this Weekend with our friends.  The Fandango website at American Sniper describes the movie as follows…

“Biopic of Chris Kyle (Bradley Cooper), the most-celebrated sniper in American military history. In the aftermath of 9/11, Kyle decides to serve his country by becoming a Navy SEAL. But with each tour of duty, he grows more detached from his wife and children…”

The Review: American Sniper is a true story about Chris Kyle that stars Bradley Cooper.  The film is directed by Clint Eastwood and it’s one of the best films he has made, definitely the best in years.  Bradley Cooper is amazing in this film and so are all the other actors, but he really does an amazing job playing this American war hero.  He should win an award for this movie for sure.

The movie is long, but it doesn’t feel long.  It’s very disturbing at times and shows the harsh realities of war and what it does to people.  The cost that has been paid to fight terrorism has been a high price to pay for sure and this film illustrates the sacrifices of American men and women and their families, as well as those who live there as well.  American Sniper is one of the best movies we have seen in a long time and it’s along the lines of Unbroken, Fury and others that show the danger and terrible sides of war.  It is very heavy at times and difficult to watch, but at the end of the film the whole theater applauded it had that strong of an impact on the audience.

We both recommend this movie and definitely thought it was a film you don’t want to miss.