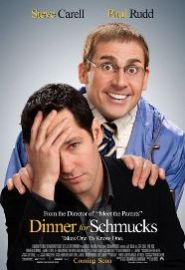 “Tim (Paul Rudd) a rising executive, works for a boss who hosts a monthly event in which the guest who brings the biggest buffoon gets a career-boost. Though he declines the invitation at first, Tim changes his mind when he meets Barry (Steve Carell), a man who builds dioramas using stuffed mice. The scheme backfires when Barry’s blundering good intentions send Tim’s life into a downward spiral, threatening a major business deal and possibly scuttling Tim’s engagement to his fiancee…”

The Review
Dinner for Schmucks was a funny movie starring Steve Carell and Paul Rudd.  They actually have really good chemistry in this movie and there are some really funny parts in the film, but it’s also a bit serious at times and somewhat crude. I think that’s the one thing that takes away from the film is some of the humor is a bit too much.  Kind of like going to see a stand-up act where the comics just go a bit too far for the audience and you cringe a little bit in your seat waiting for applause or for people to get up and leave.

It’s still pretty funny though.  It’s without a doubt different than any movie I’ve seen before with characters that are totally nuts, but believable too. For example, Steve’s character is an artist that does panoramic scenes with dead mice and Paul’s girlfriend is dating an artist who is completely insane.  Paul’s character Tim is more of a normal guy who’s trying to get a promotion and will do anything to get ahead in his career, while Steve’s character is completely destroying his life, but actually saving him from himself in the process.  It all makes for an entertaining film that I thought was pretty funny too and it’s done quite well at the box office.

Becky saw it when she was in Arizona with her Mom and she liked it, probably more than I did. They both thought it was Worth The Trip. I’m right on the borderline of it being a good rental and worth the price of admission, but I’ll say it was Worth The Trip too because it was funny and definitely like nothing you’ve seen before. The acting is really good in this one and Steve isn’t his usual character, but over-the-top nuts, like Jerry Lewis used to be in some of his old movies with Dean Martin.