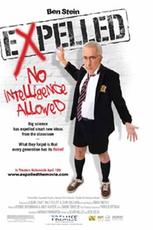 I took our kids to see the movie Expelled

last week at the AMC theaters in Highlands Ranch, Colorado. The Fandango website at Expelled describes the movie as follows:

“Ben Stein follows his journey around the globe where he discovers that scientists, educators and philosophers are being persecuted in a modern day witch hunt because they dare to go against the theory of evolution. These pillars of education are being fired, ridiculed and ostracized for merely challenging Darwin’s theory; proposing that life on this planet could be a part of some intelligent design and not random chance. This thought-provoking film not only forces us to question what we have been taught but challenges us to ask–What else is being kept from us?”

The Review
Expelled: No Intelligence Allowed is a documentary starring Ben Stein that is very thought provoking. The movie is a great flick for anyone who has a belief in God or even intelligent design for that matter and wants to see how whacked out the University systems in our country have become in defending the theory of evolution. In the film you discover that the zealots for evolution have gone to the point of preaching the theory as fact and removing from the educational system anyone who disagrees with the evolutionary viewpoint.

I thought this flick was awesome. My kids didn’t really like it since it’s directed toward an older audience, except for our oldest thought it was interesting, but it’s really not a kid’s movie. If you’re not into documentary style movies you may not like this film. If you’re an Evolutionist you will probably hate this film since it does such a great job showing how flimsy the belief in evolution as the reason for life on our planet really is and pokes fun at some of the “scientists” who believe that original life forms traveled on the backs of crystals to form human beings. I didn’t make that up by the way.

There are some very powerful aspects of this film. From a historical perspective it’s done extremely well to show what Hitler and the Nazi’s believed and how many people today believe the same things as the the Hitler regime.

As a Christian, I’ve always found it fascinating that people who champion things like global warming, nuclear proliferation, saving the whales or saving the rain forests are almost always evolutionists or atheists who deny the existence of God. The reality is that based on their belief system these people have absolutely no right to be concerned about such things as global warming or other things that mankind is doing to destroy the planet. After all, according to their belief system as an atheist or evolutionist there is no such thing as evil or right or wrong, but mankind is just continuing to evolve to a higher level and if we destroy the planet in the process it shouldn’t matter. There isn’t any life after death and whatever life remains after mankind destroys the Earth should “evolve” to another level or start the process over.

Of course, when you confront an evolutionist or atheist on these issues, suddenly their tune changes as they look for a way to climb out of the hole they have dug themselves into in their belief system. The other point I like to bring up to the evolutionist is that if the theory of evolution is true, how come it only happened once? At which point they get a puzzled look on their face and tell me “No, evolution is happening everyday around us.” My response is, “Then how come we don’t see a monkey losing its tail today that just made it to the next level of evolution or did that process stop and there are no monkey’s no going through the process any longer of becoming humans?” If evolution were true as it is really presented we would see an ongoing process of animals evolving on a daily basis that have been going through the process for millions of years and jumping to the next level.

After all, there are now over 6 billion people on the planet and millions of species that should be changing forms as they continue to go through the process of evolution. The answer for the evolutionist is that it takes millions of years for each little change to happen. Yes, given enough time in the evolutionary model anything can happen, which is much like taking a billion piece jigsaw puzzle putting it in a box, shaking it for a billion years and eventually the jigsaw puzzle will put itself together through random selection.

The fact remains that if we really made the jump from monkey to ape to human as the evolutionist wants us to believe than why are we not seeing our fellow “brothers and sisters” making the jump too or did it just happen once and now they are left to be monkeys until the end of time. I wonder how the monkeys feel when some of their human “relatives” eat their brains or cook them on a stick in some parts of the world. Maybe that’s what is preventing their jump to our “level”.

The real reason and any true scientist or child in a third world country for that matter, who understands the simple concept that things just don’t create themselves will attest to, is that mankind is destructive by nature, is under judgment by God, will eventually destroy the planet through their own selfish ambition, which is why the evolutionist and atheist are really concerned about the planet they live on. The fact is that the theory of evolution as the creator of life is as much of a fantasy as the movie “Planet of the Apes”.

In closing, I’ll leave you with something Jesus told his followers over 2,000 years ago about the future of mankind and life on this planet. The fact is that if God doesn’t intervene mankind will wipe out everyone and everything on this planet. There are enough nuclear weapons stockpiled right now from the Cold War to destroy all life on this planet several times over and Iran is wanting to build a few more. It’s a sad thing to think that if mankind did evolve that we evolved to become a creature that has the desire to destroy our fellow man and everything else for that matter. I’m glad that Hitler got it wrong!

Matthew 24: 21-21 – 21 “For then there will be a great tribulation, such as has not occurred since the beginning of the world until now, nor ever will. 22 “Unless those days had been cut short, no life would have been saved; but for the sake of the elect those days will be cut short.”

This film is definitely a Don’t Miss It in my book.