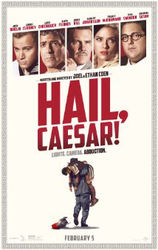 Becky and I went to see Hail, Caesar last week with our friends Hope and Chris at the AMC Theater in Castle Rock, CO last week.  The Fandango website at Hail, Caesar describes the movie as follows…

The Review:  Hail, Caesar has an all star cast, including Josh Brolin,, George Clooney and a host of others, but that is the problem with this film.  There are so many movie stars that each character only gets about five minutes of time on the screen, so the movie jumps around to fit everyone into a small skit within this quirky movie.

The acting is good in this movie and there are some really good scenes, like a wild dance scene with Channing Tatum that is entertaining, but the overall story of the movie is pretty weak and it’s just way to whacky.  The film is a movie behind the movies with the main character played by Josh Brolin trying to deal with all the craziness of managing Hollywood movie stars and their personal nonsense.  This made the film pretty funny, but it jumped from one character to the next to the next to the next and before you knew it you were watching a boring movie.

I probably liked it the most of the four of us and that isn’t saying much because I am rating this one a rental, so you should just wait until it comes out on video or Netflix.