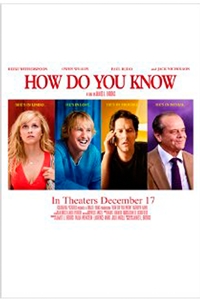 Becky and I went to see the new Reese Witherspoon film, How Do You Know last night at the AMC Theaters in Highlands Rach, CO. The MSN Movie website at How Do You Know describes the movie as follows:

“‘Director James L. Brooks returns to the helm for this ensemble comedy starring Reese Witherspoon, jack Nicholson, Paul Rudd, and Owen Wilson, and centering on the story of a passionate athlete who finds herself romantically torn between a narcissistic baseball star and a straight-laced businessman. As far back as Lisa (Witherspoon) can remember, her life has been defined by sports. Then, in the blink of an eye, she’s cut from the team. Her identity in crisis as she attempts to regain her footing in life, Lisa begins dating Matty (Wilson), a Major League Baseball pitcher and notorious womanizer. Meanwhile, terminally honest businessman George (Rudd) finds himself on the road to financial ruin or worse after being wrongly implicated in a financial crime…”

The Review
How Do You Know is a funny romantic comedy about a girl who is trying to figure out what she wants to do with her life after her career as an athlete comes to an abrupt end. Reese Witherspoon plays the main character Lisa and she does a good job in this movie. Becky commented that anytime they showed her she had on a pair of shorts or a dress to show off her legs and she definitely got in shape for this film.

Paul Rudd plays a business man who is in crisis because of his narcissistic father played by Jack Nicholson that has put him in a tough situation with the Federal Government. Those two characters were great together, although Jack is showing his age.

Owen Wilson plays a baseball player who is a crack-up because he’s so incredibly full of himself. There are some good lines from his character and the others.

Overall we both really liked this movie. It was worth the trip in our opinion, but for some people may think it’s a better rental. Should be a good date movie though.