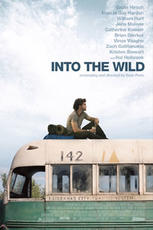 Becky and I went to see Into The Wild on Friday night at the AMC theaters in Highlands Ranch, Colorado with our friend Donna. The Fandango website at Into The Wild describes the movie as follows:

“Christopher McCandless (Emile Hirsch), son of wealthy parents (Marcia Gay Harden, William Hurt), graduates from Emory University as a top student and athlete. However, instead of embarking on a prestigious and profitable career, he chooses to give his savings to charity, rid himself of his possessions, and set out on a journey to the Alaskan wilderness.”

The Review
Into The Wild is Sean Penn’s latest movie that takes the audience into the world of a spoiled rich kid who gives up everything he has going for him to go on a self-centered trip into the Alaskan wilderness in search of an empty society.

Many people loved this movie, including a number of critics, but the best thing about this movie is the end of the film. It’s 2.5 hours long and you will go on a journey from the East Coast to the West Coast to Mexico to Alaska with some wonderful photography. I have to hand it to McCandless for the journey that he went on before he died, since he saw so many beautiful places, met a number of great people and had some incredible experiences.

Unfortunately, at every stop on his adventure people tried to have a relationship with him, convince him to contact his parents and he just threw them aside to continue his own personal quest. Our favorite character in this film is definitely Hal Holbrook who gives a tremendous performance. His character proves without a doubt, why this guy, who Sean Penn obviously admired so much to make a movie about him was such a jerk. McCandless never learned anything about relationships with people and putting others first instead of his own selfish ambition. How so many people can admire someone like that is beyond me.

For 2.5 hours we watch this guy blame his family for his non-existent personal problems instead of building a bridge and getting over his personal issues. This was ridiculous, especially since there are so many disadvantaged kids today growing up with drug and sex addicts for parents who would love the opportunities that this guy just threw away like a spoiled brat. It’s only at the end when he writes in his journal “Happiness Is Meant To Be Shared” that the light bulb went on in this guy’s life, but he discovers this too late. Too bad for him, but pride goes before destruction and he proved that well in his brief life.

In spite of the story, Emile Hirsch is amazing in this movie. This role could and should win him an Oscar. Even if the movie wasn’t that great, he made the movie. Penn did a good job directing the film, except that it was about two hours too long. We would recommend it as a rental, but you’ll probably shut it off if you’re sitting at home for 2.5 hours watching this movie.