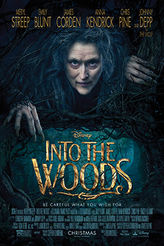 Becky and I went to see the new Christmas film Into The Woods at the AMC Theater in Castle Rock, CO on opening night with Conroy and Bianca.  The Fandango website at Into the Woods describes the movie as follows…

“Stephen Sondheim’s Into the Woods is adapted in this musical from director Rob Marshall and Walt Disney Studios. Inspired by a choice selection of Brothers Grimm fairy tales, this plot centers on a baker (James Corden) and his wife (Emily Blunt) who incur the wrath of a witch (Meryl Streep) while attempting to start a family…”

The Review: We didn’t know this movie was a musical or we probably would have skipped it, so if you’re not a fan of musicals you will want to blow this movie off for sure.  You know, those musicals where people burst into song for no reason to sing about why their cow is white.  It’s that type of a film that is more like going to the theater and seeing a play instead of watching a movie. This is not like Pitch Perfect where people sing at appropriate times, but one of those sappy films where people sing about everything that happens in their life.  Bianca looked at me about 20 minutes into the movie and asked if we could please leave.  Although, I think the movie Grease is probably the exception because that was a pretty fun musical.  This film was a bit too depressing to be a musical.

The acting, the characters, the costumes and the cinematography were all very well done.  Even the singing was really good at times, but these type of movies are exhausting to watch and I’m not sure why people like them.  If you’re a fan of these type of musicals you will love this film, although it should have ended with Cinderella finding her Prince Charming, but instead they had to take a turn to the dark side and make sure that a “happily ever after” wouldn’t happen.

Conroy liked it much more than the rest of us.  In fairness to the actors that did a great job I’ll rate this movie a rental, but for me and Becky it was definitely a Don’t Bother.