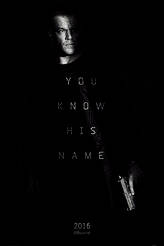 Becky and I went to see the movie Jason Bourne at the Regal Cinema in Lone Tree, CO tonight with our friends Tammy & Bruce.  The IMDB website at Jason Bourne describes the movie as follows…

The Review:  Jason Bourne is another Jason Bourne film that is so much like the other Jason Bourne films.  I think Matt Damon says a total of five words in this movie and the body count is larger than any of the previous films combined, but not really for any reason that is justified.  It’s an exciting movie, but it’s not very well written.  It’s more like a remake of the previous film than actually a stand alone film, but it’s done really well at the box office.

Our friends Tammy and Bruce both liked it, but Bruce thought it was too much senseless killing.  We liked it as well, but thought it would be much better than it was.  It’s another Jason Bourne movie and not much more to say other than that, so you know what to expect.  Becky thought it was Worth The Trip and I thought it was a Rental, but most people will go see it anyway.