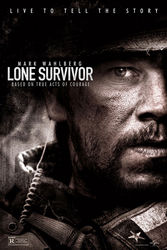 Becky and I went to see Lone Survivor on Friday at the AMC Theater in Highlands Ranch, CO with our friends Mark and Maria. The Fandango website at Lone Survivor describes the movie as follows…

The Review: Let me start by saying that I’m amazed that there are film critics, who really liked the movie Nebraska, but think that this movie was just “okay”?   When you see a film like Lone Survivor that has real heart and graphically demonstrates the incredible sacrifice of life and limb that real people have made to serve America, you realize how thankful we should all be for their service. Especially, in a questionable war that has been going on for 13 years since the War on Terror was first put into motion.

If you have a chance to see this film, you need to “Go!” because it is incredible.  You will learn what really happened when four Navy Seals were put in harms way trapped behind enemy lines with no support and had to fight against a 200 man army.  This is a movie about real American Hero’s.  The acting is fantastic.  Mark Wahlberg should win an award for his role in this movie and the story is amazing.  Be forewarned that this film is extremely graphic because war is graphic, war is gruesome, war is filled with gore because people really die in war.  Since 2001 – present day the War on Terror: Afghanistan and Iraq Wars has cost 57,614 U.S. total dead and wounded Americans, which is something that this movie will remind you of by making it personal.

Lone Survivor is one of the best films of the year in my opinion.  One of the most powerful parts of the film is when it demonstrated the 2,000 year old tradition by an Afghan tribe of protecting people who come into their tribe.  It was a starch contrast to our society that is going out of its way to destroy Judeo-Christian traditions, after just over 200 years of America’s existence.  Not everyone in their tribe wanted to hold to their traditions at the risk of potential death from The Taliban, but had a few good men not been willing to do it, the outcome of this story would have been completely different.  That message in this movie was very powerful to me.

The language is harsh and it is very sad and disturbing at times, but it’s so well done.  Becky, Mark, Maria and I all thought it was an emotional and powerful movie.  Becky and I really liked Lone Survivor and we haven’t been in a movie in a while where the audience applauded at the end of the film.  This movie is definitely a Don’t Miss It, even if you can only handle seeing it once, you should go and see it.

In closing, let me thank all of our service men and women who put their love of others in front of themselves.

““This is My commandment, that you love one another, just as I have loved you. Greater love has no one than this, that one lay down his life for his friends. You are My friends if you do what I command you.”  John 15:12 – 14