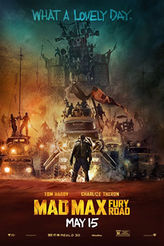 “In this long-awaited reboot of the apocalyptic series that started it all, loner Mad Max (Tom Hardy) joins forces with the mysterious Furiosa (Charlize Theron) as they get caught up in the exodus of a clan of rebels fleeing an evil despot as they race across the sun-parched Wasteland. ~ Violet LeVoit, Rovi”

The Review: Conroy wanted to see this movie the first time he saw the trailer.  I was a big fan of the Mad Max film The Road Warrior with Mel Gibson, so it was going to hard to live up to my expectations having seen that so many times back in the 1980’s.  It was a cult classic for teenagers at the time.

The first thing you have to realize about a Mad Max film is there is going to be plenty of gasoline, cars, explosions and gratuitous violence.  This film lived up to all of those expectations, but it also threw in Tom Hardy as Mad Max and Charlize Theron as a new character opposite of Mad Max going up against another diabolical character.  There is some really weird crap going on in this film, like overweight pregnant mutant women creating milk for mutant babies.  There is a strange cult that is built around violence and other gangs that are living on the road and committing murder and heinous crimes against humanity.  This is not a pleasant film about what mankind will eventually be like without morals or the rule of law for sure.

The evil characters reminded me of the characters in the film with Denzel Washington, The Book of Eli, that was also apocalyptic in nature.  The same vision of people who have no sense of right and wrong and you experience that in this movie too where it’s basically a dog eat dog world.  Mad Max though is an interesting character played by Hardy.

He doesn’t really say much in this movie, I think Theron’s character has more to say, which it was confusing as to whether this was supposed to be Mel Gibson’s character again as Max since he was so different.  As a fan of the first film, I think they should have had the kid with the boomerang in the first one when he was older and he assumed the name of Max, since that’s what Hardy’s character reminded me more of than Max.  The music didn’t fit the film at times and there was way too much going on most of the time creating a form of sensory overload. It was still entertaining for what it was though.

Okay, the end result is that Conroy and I both liked this movie, even though it’s over-the-top nuts and has some challenges and parts that are ridiculous.  We wouldn’t recommend it though for anyone though, this is a buyer beware movie.  You will either probably really like it or really hate it, so you might want to watch the first Road Warrior with Mel Gibson first and see if you like this story and genre of this character.  If you’re a Mad Max fan you are sure to like it and it will meet your expectations.