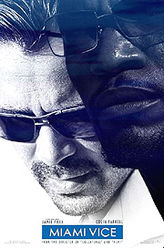 Becky and I went to see Miami Vice on Friday at the UA Theater in Las Vegas, Nevada on Las Vegas Boulevard.

We were surprised that the movie theater was not located in one of the monster hotels on the Las Vegas Strip, especially the MGM Grand since MGM is are known for movies. Instead it’s kind of a hole in the wall UA / Regal theater just off the strip located in a parking garage called The Showcase.

The Yahoo movie website at Miami Vice describes the movie as follows:

“Ricardo Tubbs is urbane and dead smart. He lives with Bronx-born intel analyst Trudy, as they work undercover transporting drug loads into South Florida to identify a group responsible for three murders. Sonny Crockett is charismatic and flirtatious until-while undercover working with the supplier of the South Florida group-he gets romantically entangled with Isabella, the Chinese-Cuban wife of an…”

The Review
Miami Vice was a movie loaded with violence, sex, more violence, more sex and more violence, along with drugs and prostitution. It was about on the same lines as Scarface for graphic violence without Al Pacino saying, “Say Hello To My Little Friend”.

The bottom line is that there was absolutely nothing original, entertaining, interesting or worthwhile about Miami Vice. It’s a bang, bang, shoot em’ up, catch the bad guys, mindless trip into the base world of drug lords and mobsters. The movie Heat with Robert Deniro, Al Pacino, Val Kilmer and a number of other well known actors was more entertaining and that’s not saying much.

If you decide to see this movie you will probably leave feeling numb to the violence, bored and wishing you would had spent two hours doing something else. The fact that we saw it in Las Vegas, “Sin City”, probably didn’t help much, but there isn’t much you can really do for this movie since there isn’t much too it.

Our advice for Miami Vice, pardon the pun, is to wait for the rental, if you are a Jamie Foxx and Colin Farrell fan, otherwise skip it all together and watch something with more substance.

Auto Broker – John Boyd “The Cool Car Guy”
John is an automotive consultant with JFR & Associates in Denver, Colorado. He can help you save time and money on any make or model, new or used, lease or purchase – nationwide! Call or email John about your next vehicle! jboyd@coolcarguy.com