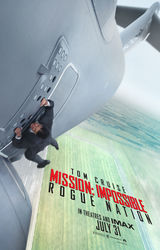 Becky and I went to see the new movie Mission Impossible – Rogue Nation at the AMC Theater in Highlands Ranch, CO.  The Fandango website describes the movie as follows…

“Ethan Hunt (Tom Cruise) and his teammates reunite for this pulse-pounding sequel, in which they attempt to take down a secret international organization known as the Syndicate–highly skilled ex-IMF agents who are intent on bringing down their former outfit…”

The Review:  The Mission Impossible series has been pretty good overall.  The last one and the first one were really good with several in between that kind of sucked.  If you’re not a Tom Cruise fan like our son Conroy, you will probably still like this film.  As he put it, “The movie was great except that it had Tom Cruise.”, which was kind of funny.  Becky and I both thought this movie was great and so did our friends Mark and Maria.  Tom Cruise is a nut outside of his movies, but there is not arguing that he knows how to make a good movie with this franchise.  It’s going to be a blockbuster and he does all of his own stunts, which are pretty over the top most of the time.

There is plenty of action and suspense in this movie.  It’s action packed from start to finish, much like Ghost Protocol.  There is a hot chick in the movie as you would expect with these spy thriller type movies.  It’s like the Bourne and 007 series if you haven’t seen the previous Mission Impossible movies.  The acting and directing are good and the only complaint from most people is that it is way too long.  Personally though I liked that it was long because it didn’t leave you hanging, like many films today end up doing.  The bottom line is that this was definitely a Don’t Miss It.  It’s worth the price of admission, so go check it out.