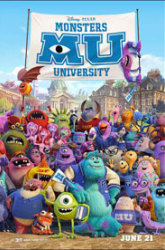 Becky and I went to see Monsters University last week with Corban and Bianca at the AMC Theater in Castle Rock, CO and a bus load of kids from Vacation Bible School.  I drove the school bus there for the kid’s night out and this was the film they had elected to see. The MovieFone website at Monsters University describes the movie as follows…

”Ever since college-bound Mike Wazowski (voice of Billy Crystal) was a little monster, he has dreamed of becoming a Scarer-and he knows better than anyone that the best Scarers come from Monsters University (MU). But during his first semester at MU, Mike’s plans are derailed when he crosses paths with hotshot James P. Sullivan, “Sulley” (voice of John Goodman), a natural-born Scarer. The pair’s out-of-control competitive spirit gets them both kicked out of the University’s elite Scare Program…”

The Review:  Monsters University is a movie that I had zero interest in seeing since our kids are older and I figured I would get out of seeing this one when I spotted the Preview.  Hey, I’m just being honest.  I thought that the movie looked stupid and I liked the first one.  Since I had to drive a bus load of kids to the movies I persuaded Becky into seeing it with me and to our surprise the movie had a better story than most of the expensive to produce action films we’ve been seeing lately.  It also had plenty of laughs.

That’s right, Monsters University was a big hit with the kids and with Becky and I.  We all enjoyed it and it was pretty well done with plenty of adult humor and showing some of the goofy decisions people make about going to college.  Granted, it’s really geared toward kids that are about 6 to 8 years of age, but who cares, there were plenty of adults in the movie when we were there and they all liked it.

It was definitely worth the price of admission and if you are fans or you have kids that are fans of the Monsters Inc. film than they should like this one too.  Billy Crystal and John Goodman can still make you laugh with these whacky characters.