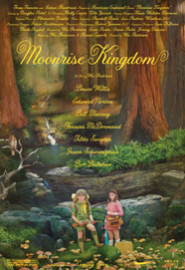 Becky, Conroy and I went to see the new movie Moonrise Kingdom last night at the AMC Theaters in Highlands Ranch, CO.  The Moviefone Website at Moonrise Kingdom describes the movie as follows…

“Set on an island off the coast of New England in the summer of 1965, Moonrise Kingdom tells the story of two twelve-year-olds who fall in love, make a secret pact, and run away together into the wilderness. As various authorities try to hunt them down, a violent storm is brewing off-shore — and the peaceful island community is turned upside down in more ways than anyone can handle. Bruce Willis plays the local sheriff. Edward Norton is a Khaki Scout troop leader. Bill Murray and Frances McDormand portray the young girl’s parents….”

The Review
Moonrise Kingdom is a quirky movie that we had no idea what was about when we went into the theater.  It was probably good that we didn’t know what it was about or we may not have seen it.  This movie is a trip.  It’s one of the whackiest movies we’ve ever seen.  Conroy said it was the strangest movie he had ever watched, but it was very well done.

The acting in this movie is great and it stars a number of popular actors, including Bruce Willis, Bill Murray and Edward Norton.  The story is so bizarre and I don’t want to give it away.  My friend Caren went and saw it before we did and she just said, “It’s quirky and I really liked it” and I’m glad that was about all she said because we had no idea what to expect.  It’s very funny.

We all liked this movie and thought it was Worth The Trip, so put this one on the list, if you’re in the mood for something that is out of the ordinary.