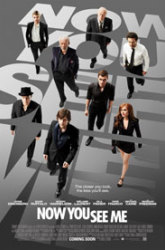 Becky and I went to see Now You See Me this Weekend at the AMC Theater in Castle Rock, CO and then again at the Regal Cinema in Lone Tree, yesterday with our friends Rod and Kimberly and our boys Conroy and Corban. The MovieFone website at Now You See Me describes the movie as follows…

“‘NOW YOU SEE ME’ pits an elite FBI squad in a game of cat and mouse against “The Four Horsemen”, a super-team of the world’s greatest illusionists. “The Four Horsemen” pull off a series of daring heists against corrupt business leaders during their performances, showering the stolen profits on their audiences while staying one step ahead of the law…”

The Review:  Now You See Me is a fun really movie with plenty of plot twists to keep you entertained and guessing about what’s going on.  Many of the critics have not been very kind to the film, some saying that it’s too predictable, which is ridiculous. It’s very well done with great acting and directing and it’s a very clean and entertaining film.

The story is clever as the FBI is chasing down a group of bank robbing magicians, who are giving all the money away to the audience on their quest for fame with really great magic tricks.  There is a plot within the plot as you try to discover what the real motive is for robbing these banks using elaborate magic tricks. Morgan Freeman’s character is making money off of exposing their tricks and he plays an interesting role in this movie.  It was really cool how they tied the whole story together with a famous escape artist and all of the characters had their own unique skills that made it really fun to watch.

They maybe could have done a little better job hiding the “fifth man”, but it had so much going on that it kept you guessing.  We all really liked it and would recommend seeing it.