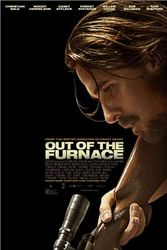 ‘‘From Scott Cooper, the critically-acclaimed writer and director of Crazy Heart, comes a gripping and gritty drama about family, fate, circumstance, and justice. Russell Baze (Christian Bale) has a rough life: he works a dead-end blue collar job at the local steel mill by day, and cares for his terminally ill father by night. When Russell’s brother Rodney (Casey Affleck) returns home from serving time in Iraq, he gets lured into one of the most ruthless crime rings in the Northeast and mysteriously disappears. The police fail to crack the case, so – with nothing left to lose – Russell takes matters into his own hands, putting his life on the line to seek justice for his brother. The impressive cast of Christian Bale and Woody Harrelson are rounded out by Casey Affleck, Forest Whitaker, Willem Dafoe, Zoe Saldana and Sam Shepard...”

The Review:  Out of the Furnace is a film that is designed around a somewhat strange screenplay and carried on the big screen with totally raw acting.  Every actor in this movie is amazing, but especially Casey Affleck, Christian Bale and Woody Harrelson.  Woody’s character is pure evil on the same level as the Joker in the Batman series.  He does an amazing job pulling this character off.  The guy is totally disturbing in this movie and Christian Bale is like Batman without the suit.

The story is really wild and is a story within a story that deals with the issue of poverty in America.  It’s a very dark film that doesn’t have any high end special effects or ridiculous scenes like so many action movies of today.  I don’t think this is a movie that everyone is going to like because it is a difficult film, almost like one of the older classic films like “Walking Tall” or “The Pride of Billy Jack” where there is action in a movie that is more of a drama about good versus evil.

Becky and I really liked this movie and thought it was a Don’t Miss It.