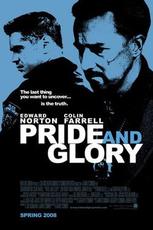 Becky and I went to see Pride and Glory at the AMC theaters in Highlands Ranch, CO last week. The Fandango movie website at Pride and Glory describes the movie as follows:

“A gritty and emotional portrait of the New York City Police Department, the film follows a multi-generational police family whose moral code is tested when one of two sons on the force investigates an incendiary case involving his older brother and brother-in-law. The case forces the family to choose between their loyalties to one another and their loyalties to the department.”

The Review
Pride and Glory is a dramatic film starring Jon Voight, Edward Norton and Colin Farrell, which is a pretty all-star cast. The film centers around Ed and Colin’s characters who are brothers by marriage and both cops. One is a good cop and the other is bad. Not just bad, but downright wicked.

The acting is really good, but it was extremely graphic and disturbing in parts. It’s definitely not a feel good movie and it was too predictable knowing what was going to happen next.

Pride and Glory is another cop movie that reminded us a bit like Copland or so many of the other cop movies we’ve seen before. I can’t say we really liked this film. At best it’s a rental and wasn’t worth the price of admission for having the big name stars.