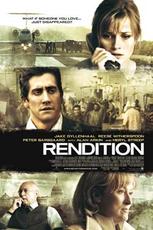 Becky and I went to see Rendition last week at the Kerasotes theaters in Castle Rock, Colorado. The Fandango website at Rendition describes the movie as follows:

“Post 9/11, Egyptian born chemical engineer, Anwar El-Ibrahim (Omar Metwalley) disappears on a flight from South Africa to Washington DC. He is shipped off to a third world country for interrogation after he is deemed a political prisoner. His pregnant American wife, Isabella (Reese Witherspoon) travels to Washington to try and learn the reason for his disappearance. Meanwhile, at a secret detention facility somewhere outside the U.S., CIA analyst Douglas Freeman (Jake Gyllenhaal) witnesses the unorthodox interrogation of a foreign national by the Egyptian secret police. The event forces him to question his assignment as he becomes entangled in the interrogation of El-Ibrahim.”

The Review
Rendition is a politically charged, far-fetched film that does a good job of bringing up the fact that the government can easily hide too much from its citizens, but beyond that it was kind of a so-so flick. The movie was disconnected and boring most of the time.

The acting was okay, probably not Reese Witherspoon’s best role. The characters were disjointed and it wasn’t believable given the power of the media today to expose things like abu-ghraib and blackwater. Plus, the primary story about the young girl and her bomber boyfriend all tied together wasn’t realistic at all.

The movie wasn’t bad, but it wasn’t great either. We all agreed that it definitely was a rental and not worth the price of admission.