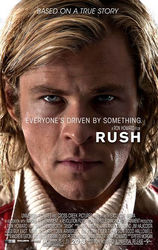 Becky and I went to see RUSH on opening night at the Regal Cinemas in Lone Tree, CO.  The Fandango website at RUSH describes the movie as follows…

”The epic action-drama stars Chris Hemsworth as the charismatic Englishman James Hunt and Daniel Brühl (Inglourious Basterds) as the disciplined Austrian perfectionist Niki Lauda, whose clashes on the Grand Prix racetrack epitomized the contrast between these two extraordinary characters, a distinction reflected in their private lives. Set against the sexy and glamorous golden age of Formula 1 racing, Rush portrays the exhilarating true story of two of the greatest rivals the world has ever witnessed—handsome English playboy Hunt and his methodical, brilliant opponent, Lauda. Taking us into their personal lives on and off the track, Rush follows the two drivers as they push themselves to the breaking point of physical and psychological endurance, where there is no shortcut to victory and no margin for error. If you make one mistake, you die…”

The Review:  RUSH is definitely my favorite film of the year.  It is extremely well done and the fact that it’s based on a true story makes it even more exciting.  Ron Howard did a great job on this movie and the story is very powerful by itself, but he really pulls you into these two characters.  The action is great and even if you’re not a racing fan or a car fan, you should still like this movie.  It’s just a really fun flick!

The contrast between the two race car drivers and their different personalities is very cool in this movie.  It really fascinating to watch and see how two people that are complete opposites could both arrive at the same results.  The movie also shows how much pure determination, raw talent, precise calculations and risk taking plays into becoming a champion.  The challenges the two men faced in their personal life was amazing, while still focusing on their profession of race car driving.

The acting in this film was great and the Directing was fantastic.  I expect that this movie is definitely going to win some awards.  Becky and I both liked it so much that we went to see it twice!  Put this one on your list as a Don’t Miss It before it leaves the theaters.