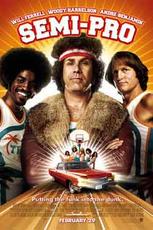 Becky and I went to see the new comedySemi-Pro at the AMC theaters in Highlands Ranch, Colorado on Friday. The Fandango website at Semi-Pro describes the movie as follows:

“In 1976, singer Jackie Moon (Will Ferrell) uses the profits from his one-and-only hit single to fulfill his longtime dream of owning a basketball team. Jackie’s team, the Flint Michigan Tropics, is the worst team in the league, and what’s more, the franchise may fold when the ABA and NBA announce plans to merge. It’s up to Jackie and the Tropics to turn their game around and slam-dunk their chance for survival.”

The Review
Semi-Pro is another really stupid flick starring Will Ferrell and Woody Harrelson. The story was actually really funny, but the problem with this flick is that it’s so juvenile that it should have been done as a PG film directed toward kids. Unfortunately, it’s loaded with vulgarity that totally wrecks the film. It’s just a raunchy flick and most of the laughs come from that type of comedy instead of anything that’s really funny.

If you liked Talladega Nights you will probably like this film too, but Talladega was much better and not nearly as stupid as Semi-Pro. Woody was much better in this movie than Will with a character that actually had some depth, compared to Will’s character Jackie Moon (love the name), who was a complete moron. It reminded me of Anchorman, which was another Will Ferrell movie that I thought was a disaster.

Semi-Pro is like a cross between Talladega Nights, Blades of Glory and Anchorman and it’s without a doubt a rental at best. I don’t know anybody who walked out of the movie and didn’t think they just wasted their time. What was really amazing is how many kids were in this movie and it’s for sure a rated R movie. Don’t bring your kids to this, even if they want to go, you’ll be sorry you brought them along. Unless you’re a total deadbeat Dad who doesn’t care about what influences your kids.

Becky rated it as a Rental and I thought it was a Don’t Bother. It was just far too stupid to warrant watching ever again, except for maybe when they figure out how to put it on T.V. and can get rid of a good portion of the film.

Tune Into The Cool Car Guy Show The Eye move Every Thursday 10AM – 11AM MST on Castle Rock Radio – CastleRockRadio.com