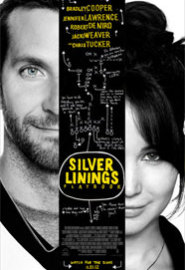 “Life doesn’t always go according to plan…Pat Solitano (Bradley Cooper) has lost everything — his house, his job, and his wife. He now finds himself living back with his mother (Jacki Weaver) and father (Robert DeNiro) after spending eight months in a state institution on a plea bargain. Pat is determined to rebuild his life, remain positive and reunite with his wife, despite the challenging circumstances of their separation. All Pat’s parents want is for him to get back on his feet – and to share their family’s obsession with the Philadelphia Eagles football team. When Pat meets Tiffany (Jennifer Lawrence), a mysterious girl with problems of her own, things get complicated. Tiffany offers to help Pat reconnect with his wife, but only if he’ll do something very important for her in return. As their deal plays out, an unexpected bond begins to form between them, and silver linings appear in both of their lives…”

The Review: Silver Linings Playbook is a film that I really didn’t want to see, but Becky brought me along for the ride with her friend Michelle.  I was expecting this movie to be stupid based on the Previews I had seen for the film, but it turned out to be a great movie that was very well done.

It stars Bradley Cooper who does a great job playing a guy who has been destroyed emotionally by his wife having an affair and he’s a train wreck emotionally when we meet him in the film.  However, his Dad played by Robert Deniro is even more nuts than Bradley’s character, but everything thinks he’s normal.  This makes the film very entertaining because of the dialogue and relationships between all the characters in this movie.  Most of the people in this film are trying to figure out how to deal with what life has handed them, even people who seem normal are a bit crazy.  It was even more fun watching this movie with our friend Michelle since she works with people who have psychological problems.

The acting was great in this movie, Cooper should win an award for his role and it was really funny as a romantic comedy, but also had some very serious parts to the film as well.  It was a really good movie because it was so true to life.  You can definitely relate to these characters.  Some of them may be your next door neighbors and it was so well done with the real life challenges the characters were facing and the way it was Directed.  Jennifer Lawrence is perfect in this movie too and the chemistry between her and Cooper’s character is superb.

This movie is definitely rated R for the language and sexual situations, but it’s really a great flick and very entertaining.  I thought it was definitely Worth The Trip, possibly even a Don’t Miss It and Becky liked it so much that she rated it a Don’t Miss It.  She said that she could go see it again.