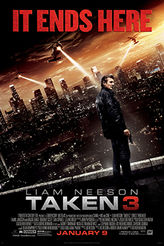 Becky and I went to see the new Liam Neeson movie Taken 3 at the AMC Theaters in Castle Rock, CO this Weekend.  The Fandango website at Taken 3 describes the movie as follows…

“The chase is on once again in this sequel from Taken 2 director Olivier Megaton, and screenwriters Luc Besson and Robert Mark Kamen. ~ Jason Buchanan, Rovi…”

The Review: I didn’t have much interest in seeing this movie after watching Taken and Taken 2.  We figured by now they should figure out how not to get taken, but it was actually much better than we expected.  The story is much more clever than the previous two films because they didn’t actually have anyone get taken.

The story picks up with his wife played by Famke Janssen is married to a super rich dude, who is involved with the Russian Mafia that ends up putting her life and the life of their daughter at risk.  Liam’s job is to find these gangsters and take them out, while trying not to get caught by the police.  The movie is pretty action packed and it’s much better than we expected.

Taken 3 is not a great movie, but it’s not terrible either.  It’s entertaining as an action thriller and not overly complicated, but it is pretty far fetched most of the time since Liam Neeson is getting to be old and beating up on these guys in their twenties.  He also would have a hard time evading the police with all the technology they have to track people today.  However, if you can look past most of the problems with the movie it was a pretty good movie overall.  We both liked it.