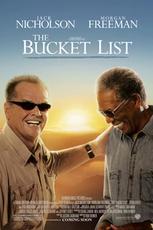 Becky and I went to see The Bucket List at the AMC theater in Highlands Ranch, Colorado this past weekend. The Fandango website at Bucket List describes the movie as follows:

“Two terminally ill men try to fulfill a wish list known as “The Bucket List” before each kicks the bucket. After they break out of a cancer ward, they head off on a road trip with an itinerary that includes racing cars, eating giant plates of caviar and slinging poker chips in Monte Carlo.”

The Review
The Bucket List is a good flick with plenty of emotion, but I didn’t think it was a great flick. Probably because the movie studio gave away so much of the film in the Previews that the jokes and interesting parts of the film were less funny and compelling when we saw them on the big screen. I didn’t think that it was very believable and probably would have been better if the characters were not from such different walks of life. Becky disagreed and thought it made sense seeing that they are both terminally ill. She really liked the film and would rate it a Don’t Miss It where I thought it was Worth The Trip.

Jack Nicholson and Morgan Freeman were both great in this movie, but for a while there you almost think the two of them are a little too close for not knowing each that well. It gets a bit weird at times, but it redeems itself in the end. I started to wonder why they were going all over the world, it started losing the point after a while. Also, there is no way they would be doing all the things they were doing with such a short time to live. I wasn’t convinced their health would hold out as long as it did.

Anyway, it was still worth the price of admission and I think Becky liked it more than I did. I thought it was a good flick though.