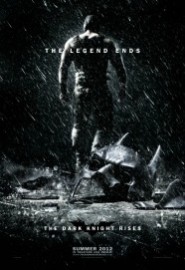 “Christopher Nolan’s Batman franchise continues with this Warner Bros. release, the third in the series. The story will pick up after the events of The Dark Knight, with Christian Bale returning as the Caped Crusader — this time pitted against the deadly Bane (Tom Hardy) and Selina Kyle, aka Catwoman (Anne Hathaway). Nolan directs from a script he co-wrote with his brother, Jonathan, working off the story by David Goyer. Joseph Gordon-Levitt co-stars…”

The Review
The Dark Knight Rises is the final installment of the Batman series that is now clouded in real-life horror, after a madman went to the Midnight showing in the Cinemark 16 theater here in Aurora, Colorado and murdered and injured people in Theater 9.  The absolute senseless killing of innocent people committed by the monster on that evening is unbelievable and we pray that God will have mercy on all the souls and the injured of that night, while helping their families.  If you would like to make a donation to help with the victims medical expenses, please visit GivingFirst.org.

The movie was actually fantastic for the last installment of the Batman trilogy.  There is plenty of action, it’s a bit too violent at times as the villain is diabolical.  I thought it was amazing and extremely well done.  However, it’s very long and you really need to be a Batman fan to like this film.  Anne Hathaway as Cat Woman was great.  Becky thought it was way too long and didn’t like it that much.  Conroy, Corban and Bianca liked it more than Becky, but Becky and Bianca both thought it was a rental.

I thought it was a Don’t Miss It.