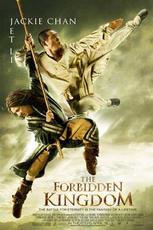 “Jason (Michael Angarano), an American teenager, is a huge fan of Hong Kong cinema and old kung-fu movies. While browsing in a Chinatown pawn shop, he discovers the stick weapon of an ancient Chinese sage and warrior, the Monkey King. The magic relic transports Jason back in time, where he joins a band of legendary martial-artists on a quest to free the imprisoned man.”

The Review
The Forbidden Kingdom is a great kung-fu movie with a fantastic fantasy story and plenty of action for all ages. The movie was very well done and the characters were super cool. Jet Li and Jackie Chan were great in this film and Jet Li actually played two characters in the film. He plays The Monkey King and The Silent Monk. Jackie Chan plays Old Hop, which was quite a bit like Drunken Master that has been done before, but he did a great job on it.

I like fantasy and kung-fu films, so I really thought this was a cool flick. Becky on the other hand didn’t like it as much as Conroy, Corban and I, but she still thought it was worth the price of admission on the big screen. The characters in this film were really wild with magical powers. Li BingBing was awesome as the white witch and we all hated to see her meet her fate.

There is a moral to the story and the ending was as good as the beginning. If you like fantasy or martial arts films you’ll like this one. Be forewarned that the Previews were for Rated R films, so you may have to watch out for that if you take smaller children to this movie. I’m rating it as a Don’t Miss It since I thought it was awesome.