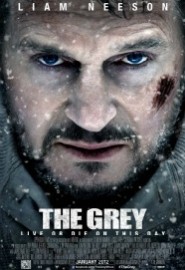 Becky and I went to see the new movie The Grey this Weekend at the AMC Theaters in Highlands Ranch, CO. The MovieFone website at  The Grey describes the movie as follows…

“Watch Liam Neeson as an unlikely hero who is forced to lead a group of roughneck guys in their fight to survive and return home when their plane crashes into the remote Alaskan wilderness. Battling injuries and merciless weather, the men must escape the icy elements — and a vicious pack of rogue wolves on the hunt — before their time runs out.”

The Review
The Grey is a flick where if you’ve seen the trailer for the film, you’ve seen the entire movie.  We went and saw this film with our friends Mark and Maria and three out of the four of us thought this film was terrible.  We were expecting a great movie and it was a dog, which I guess is fitting.

Here’s the movie in a nutshell.  Watch a depressed guy get on an airplane that crashes in the wilderness of Alaska with only seven survivors.  After the plane crash, the audience will spend the remaining two hours watching the seven survivors all die in the wilderness in a variety of ways.  Like that television show 1,000 Ways To Die, only in this film there are 7 ways to die.

This was the best they could come up with for this movie?  The movie poster was the best part of this movie.  I can’t believe Neeson decided to do this film.  It was boring, the animation was a joke, and even the wolves looked like giant puppets.  The Director or the Screen Writers must have sat around and said, “Let’s have one guy die by getting eaten by wolves, then will have another guy fall to his death and another guy drown, and…” it’s really bad.  It reminded me of that low budget film Frozen, where some people get left on a ski lift and freeze to death.

We’re not going to recommend this one even as a good rental.  It’s a waste of time.